The Art and Business of Inspiring Your Customers

There are certain conversations that stay with me forever.

One of these I wasn’t even a part of. I was sitting in the dining area, next to the kitchen, training the Tony Robbins editorial team on SEO. I had only recently arrived at the company, I barely knew anyone. One of the head coaches comes in, I believe his name is Mike, and takes a seat with us. They all know each other, and the conversation quickly shifts.

One of the editorial team members explains the challenges she’s faced trying to sell her sustainable, organic hamburger meat at local farmers’ markets. She says something akin to, “I think I charge too much. It’s about $6 per cooked patty. I have to lower my prices.”

“No!” says Mike. “Never lower your price. If people aren’t willing to pay it, it’s because you haven’t successfully communicated the value of the product.”

“Why should someone pay $6 per hamburger?” he asked. “Because it adds 2 years to your life. Because it makes you healthier and gives you energy, versus sapping it like the less healthy alternatives. People will pay $6 for a hamburger, you just have to give them a convincing reason why they should.”

It shifted my perspective immediately. Yet, I still didn’t completely understand the meaning of the lesson. Good thing it would be re-taught to me several times.

All the top sales gurus have their own lingo, their own branded approach to sales, but beneath the buzzwords they all make the same point: there are two approaches to influencing others into making decisions, manipulation or inspiration. Sometimes manipulation is called “extrinsic motivation” and inspiration is known as “intrinsic motivation.” The former is a coercion, the latter is a product of an internal drive for change.

In life and in business, you are likely to both manipulate and inspire. We should realize that our core customers, the happiest ones, the people most likely to promote us to their peers, are the ones who are intrinsically motivated to do so. Doesn’t it make sense to focus on tapping into our customer’s intrinsic motivations and showing them how our products align with these?

As it turns out, the lesson has been known to economists for over a century.

In 1899, economist Thorstein Veblen developed the idea of the “Veblen Good,” which is an economic good where the price increases as more people buy it. This is the opposite relationship of most economic goods, which see a decrease in demand as prices rise. Why would people buy more of something when it gets more expensive?

Veblen had an agenda, and he wasn’t necessarily wrong, and he posited that these goods were most likely luxury goods. People bought more of them as the price rose because an increasing price communicates exclusivity and luxury. People who buy Rolls Royce wouldn’t buy them if everyone owned one.

Veblen was on to something and is undoubtedly right. The wealthy sometimes buy things for status, and you know that if you were that wealthy you’d do the same. It’s not just the well-off, either.

There’s another reason someone with a higher priced service would sell more than a competitor at a lower price.

After all, why would a customer pay a higher price if a competitor is charging less? Because something has inspired them to choose the more expensive option. They believe the higher-priced product can help them achieve their wants and desires, and they think that the higher-priced product is going to do a better job at doing that than the lower-priced alternatives. It’s why someone is likelier to buy an iPhone than the cheaper, less fancy smartphones they sell at Walmart.

The practical difference in the sales model can determine the dynamic for years to come. Manipulations, like special offers and discounts, lose their attraction over time and they need to be made fresh, bigger, and more appealing. All the while, competitors who are inspiring are getting just as much or more business, at a higher price point.

Where on the curve is your business at? 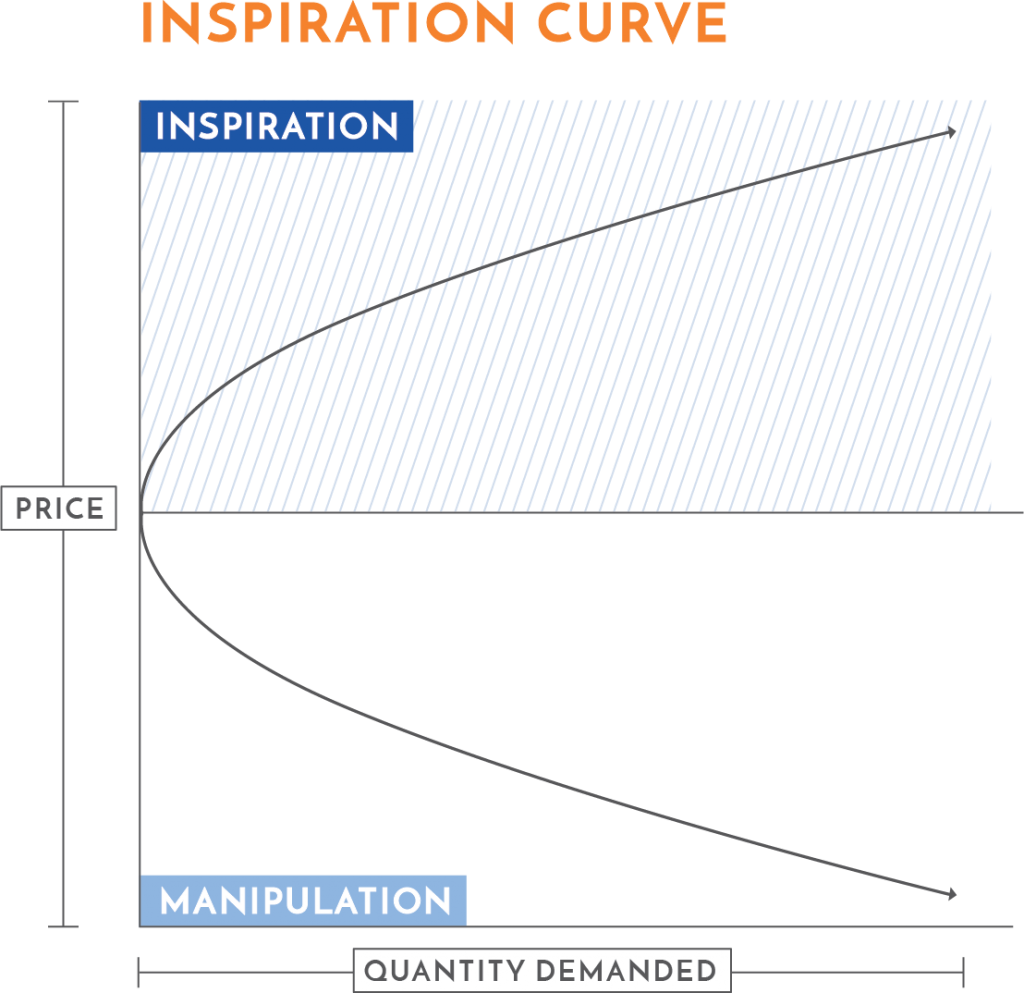 Dr. Stephen Grussmark is Florida’s only Diamond Plus Invisalign provider. He can charge well over $5,000 per Invisalign treatment. There are no discounts, he charges full price because both he and his patients know that the price is well worth it. They are inspired by the values he communicates, including a commitment to excellence and the sense of safety. Patients who come to him are assured of the quality of the results they’re going to get.

Dr. Grussmark practices in Miami. If I do a search for Invisalign providers in Miami, I immediately get offers for “up to $2,600 off” or “as low as $129/month.” Another location advertises Invisalign for $2,499.

There is hardly a day in Dr. Grussmark’s office where the lobby isn’t packed full of waiting patients, even though he charges twice as much as many of his competitors.

There are Invisalign providers in the Miami area offering magnificent discounts who aren’t getting business at all, and it’s because they aren’t inspiring patients to come see them.

Manipulation is Okay if You Are Inspiring

Tony Robbins says you can appeal to someone’s intrinsic and extrinsic motivation, and that intrinsic motivation is by far the superior method. Someone is more likely to make a lasting change when they are inspired to do so. It’s the basis of his coaching programs and the core of his sales training.

Yet, I get emails from the Tony Robbins teams with discount prices often, at least three to four times a year. Offering discounts and lower prices is okay and you don’t have to stop trying to persuade customers and patients with good deals.

When I was the analyst at Robbins Research International, the company behind his coaching events and products, I was able to see customer feedback first-hand. In fact, the research I did based on qualitative customer feedback influenced important and significant projects, such as Ask Tony. What I found was an enormous amount of trust in Tony, to the extent that people used satisfaction surveys to talk about the challenges in their life.

Whatever you think about Tony Robbins, the fact is that most of his customers are more than satisfied with their decisions to pay for his events and products. They are what he calls “raving fans,” customers who are extremely likely to recommend him to their friends and families. He calls this the secret to his success, the reason why his business seems to build itself on its own. And it’s true; the brand is the single-largest revenue driver at Robbins Research International because the brand represents something that inspires people to act and catalyze change in their life.

Tony offers his customers good deals, but this isn’t the main driving force behind the sales his team make. Rather, the offers help push his customers over the edge.

They have the emotional reasons to buy. The brand represents the wants and values that his customers identify with. Sometimes, though, no matter how inspired you are, shelling $200 for a weight loss audiobook is just not going to happen. For many of us, including me, that would just be fiscally irresponsible. Emotion is not always enough.

People need both emotional and logical reasons to buy.

Buying something you really want that you typically can’t afford makes more sense when it’s 40% off. Right?

Yet, the emotional reasons are there. The ‘why.’ The inspiration. There should always be elements of intrinsic motivation, even if you are using manipulatory tactics to push them over the edge. The customer or patient should always feel safe with their decision.

It’s when you manipulate without also giving emotional satisfaction where you’ll have an unhappy patient. It makes a big difference, because a happier patient is easier to upsell. In fact, you don’t have to upsell a happy patient. You’re inspiring them to do better, to make improvements that will help them meet the outcomes they truly want, so influencing them to make these changes will come more naturally and intrinsically.

“People don’t buy what you sell, they buy why you sell it.”

— Simon Sinek, Start With Why

Dr. Grussmark can get away with a perpetually full lobby even though he’s charging more than twice as much as his competitors. Why? Because he’s able to inspire his patients by appealing to their emotional reasons to buy. This goes beyond the usual reasons for buy Invisalign, namely the desire to have greater confidence in your smile and to fit in. There are many Invisalign providers, after all. Why him specifically? Because he communicates the same standards that his patients identify their wants with.

Is it because you have a high standard of excellence? Does your website, office, and marketing materials reflect this standard? Is it because you care more about the person behind the patient than your competitors? Does the message in your marketing communicate this, does it inspire people to call you?

I challenge you to find your ‘why’, to find the emotional reason your customers should be inspired to choose your products or services. It will make the difference in your success.

Previous post Why You’re Leaving $25,000 Bills on the Sidewalk Next post The Right Google Ads Metrics for Informed Business Decisions