Why Dentists are Investing in Yelp and You Should Too

Do you know how often Yelp shows up on the first page of Google for a local dentist search? 97 percent of the time.

I did the math myself.

I looked at 140 different cities, as small as 6,191 souls to as many as 8.5 million. I recorded where the first Yelp listing showed up and how many times Yelp was listed on the first page.

This is what I found:

If you’re in a city with over a half of a million folks living in it, you can change that to 100 percent of the time. Guess what position on Google it occupies on average? #1. Wait, there’s more. For these markets, Yelp shows up on Google’s first page twice on average — first and second, more often than not.

Even if you’re operating in a small town, you still can’t escape Yelp’s dominance. 95 percent of cities and towns with less than a hundred thousand people still saw Yelp on the front page of Google, even if in this case Yelp’s average position was third.

Yelp is the dominant review website for local businesses. It makes sense that it’d dominate local Google search, too.

Let’s talk about how this changes the game for you.

Dental search can be straightforward and there are some key phrases that all dentists tend to want to rank for, like ‘dentist in [your city]’ and ‘dentist near me.’

These are the terms that drive most of the traffic that’s looking to convert into patients.  They also tend to be the most competitive, since every other dentist in your city is looking to rank for the same terms. Now the competition has gotten stiffer.

Major directories are creeping into the first page of the Google search results for these terms. If you do a search for ‘Dentist San Diego,’ 6 out of 10 of the first page results are third parties recommending dental practices:

If you do a search in your own locality, I’m positive you’ll find similar results. The major exceptions are the very small markets, where only Yelp or Healthgrades might show up.

These are large sites that are used by patients to find the right dentist — the right business, more generally — and the more trafficked they are, the more likely they are to rank highly on Google. Also, remember that link to Yelp you asked your marketing company to add to your website? That’s a vote in favor of Yelp and it will help them rank higher. With thousands of websites pointing to Yelp and other review aggregators, it’s no surprise that they rank so well for high-traffic, competitive terms.

This changes the game, because not only is it harder for you to rank your practice website for these terms but now you must contend with added dimensions to your lead generation.

If someone clicks on Yelp from Google, that’s another chance for you to show up in the search. Right? Yelp is just another layer of the search game, as is Angie’s List and Healthgrades. They’re all platforms people trust to find dentists who fit their needs.

Not only does Yelp earn a lot of its traffic from Google organic search, it also has a large internal search that’s largely independent of Google’s.

That’s right, Yelp is its own world.

Yelp as a Search Engine

Yelp, like Google, shows organic results to users who search for different types of things. Whereas Google is an index of the entire web, Yelp is an index of all the businesses with accounts on their platform. Their directory is so large and so active that it’s like a magnet that pulls more traffic toward it.

It has become its own inclusive community with a user base that is largely independent of Google’s. These are people who search for and review local businesses through the Yelp app on their phone. Their reviews are followed and they’re taken seriously by other Yelpers who know them.

Yelping, to many, is serious business.

I worked with an attorney in San Diego and I would recurrently stress the importance of enticing clients to leave reviews on Yelp. I give dental clients the same advice.

The feedback I most commonly hear is that the type of patient or client they see just doesn’t use Yelp. They don’t have the app. They don’t know how to use it. They’re too old to use it. By the time they get home, they forget. The reasons for not getting Yelp reviews are endless.

What if you’re not getting Yelp reviews because you’re not targeting the right people? What if the people who are most likely to leave you a review on Yelp are the same people who look for their next dentist exclusively on Yelp?

If you’re not already ranking well, then that’s not business going to you and neither is that person’s review.

Like with Google, it’s a question of keywords. It’s also a factor of the reviews you get.

We now have the classic problem of which came first, the chicken or the egg.

We know that Yelp reviewers tend to be exclusive to Yelp, meaning it’s the community that they’re most invested in. It’s like its own market, significantly independent from the rest of the online space.  If we want more reviews, we need to attract more Yelpers.

How do we do that?

What if you could pay to show up at the top of the Yelp search?

Wouldn’t that help overcome the problem of being unable to tap into the Yelp market because you don’t have enough reviews?

Wouldn’t it also help you earn more leads from Yelp, whether they come with reviews or not? If Yelp has a market that’s independent of Google’s, these are people who you usually don’t hit with your marketing. Why aren’t you?

Enhanced Listings come with a number of benefits, including a call-to-action button, the ability to add a photo slideshow, and even the option to include a video in your profile. All very powerful tools to help increase the leads you’re earning through the platform.

On top of all of that, it allows you to start paying for advertising.

Why pay for advertising?

Because it can get you to the top of the Yelp search, just like Advanced Dental Center of Florence in Florence, SC: 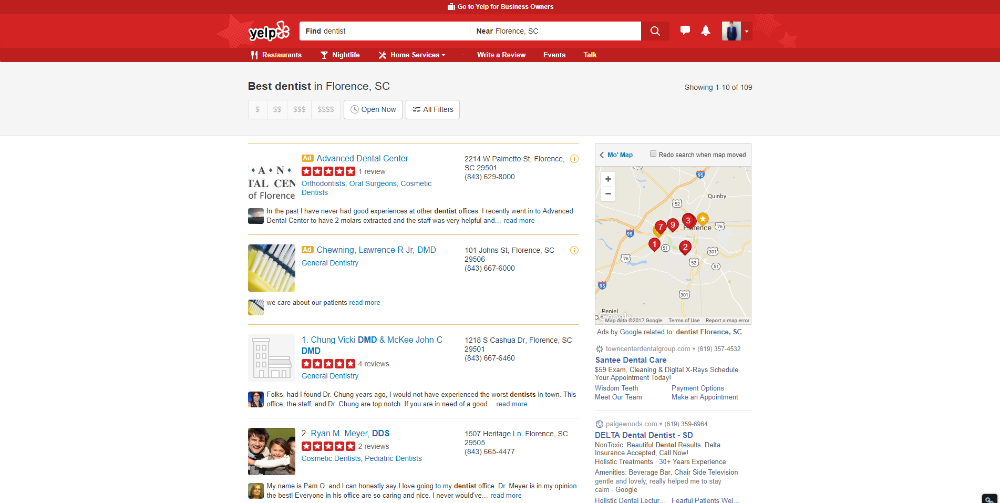 ‘Great, so I can pay to be at the top of Yelp. Does it produce real results?’ you ask.

Rather than me tell you, what if I showed you? 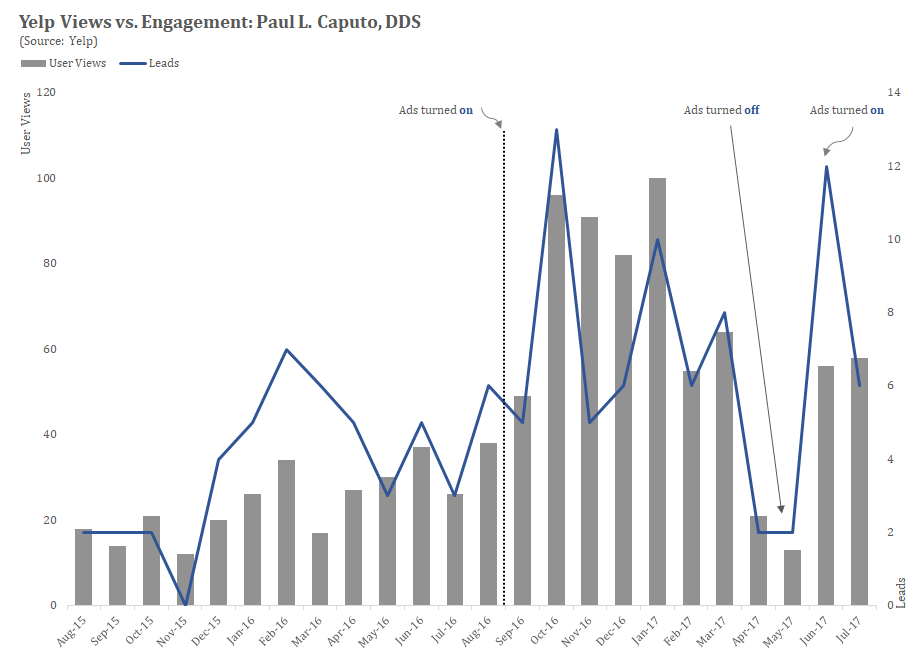 His enhanced listing was turned on in September 2016, and you can see the immediate spike in views and leads. When the ad was turned off in May 2017, we see a massive drop. When it’s turned back on in June, views and lead spike again.

A similar story is told by Advanced Dental Center of Florence’s data. His enhanced listing was turned on in October 2016, we see a corresponding increase in views and leads: 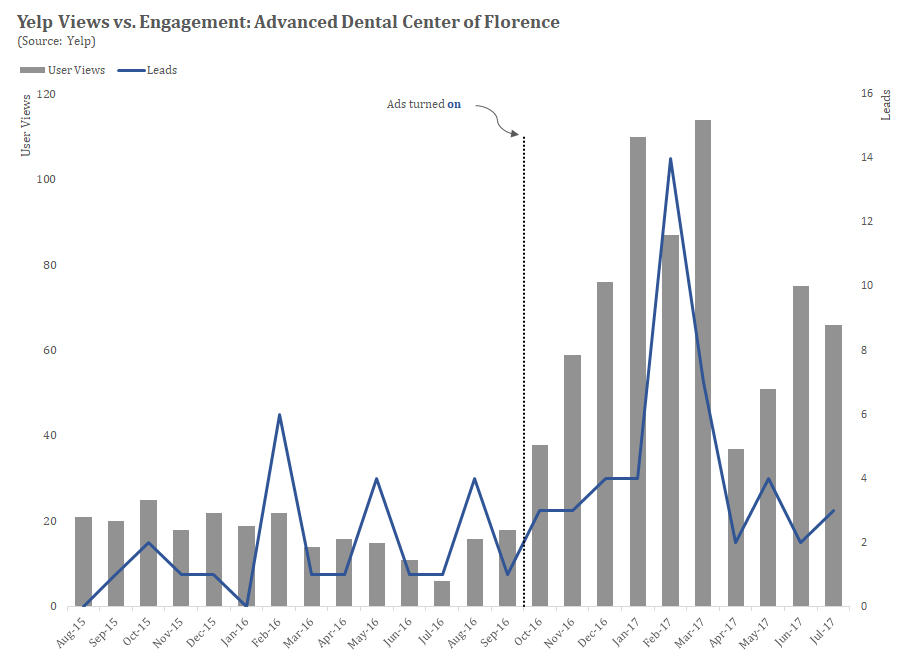 The data is seasonal, and so Yelp ads can’t promise you high views and high leads every month. But the above data shows that on average Yelp enhanced listings can go a long way in increasing your practice’s visibility on Yelp, whose dividends are especially important because to a large extent they’re different to the leads you get from Google — or they’re leads where Google wasn’t enough.

Investing in Yelp: Why Go Through a Yelp Partner?

You can invest in Yelp on your own. You can manage your own listing, upload your own photos and videos, and you can respond to reviews. In fact, however you’re investing in Yelp, those are all things that I highly recommend you do.

However, whereas going at it alone locks you into a contract, buying Yelp ads through a Partner is much more flexible — you can pay month-to-month.

Furthermore, a Partner can help you better track ROI.

Yelp provides a good amount of data to you, but what it considers a lead can be broad. If a user clicks on the link to your website, that’s marked as a lead.

What is that user doing once they land on your site?

A Partner can help implement tracking and goals that gives you a much more concrete and accurate idea of the amount of business being driven to you from your Yelp listing.

It’s also very easy to start. The Yelp Enhanced listing costs $75. Your ad budget is up to you, although the minimum is $300. The data above, of Caputo’s and Griffin’s campaigns, show the results of minimum ad spend.

Even a little bit of spending on Yelp can go a long way.

What would it hurt to give it a try?

Previous post Is your Content Failing? Here’s Why You NEED to Work with Your Marketing Team! Next post The Habits of Excellence and the Qualities of a Top Agency